Insects We Don’t Kill and Why 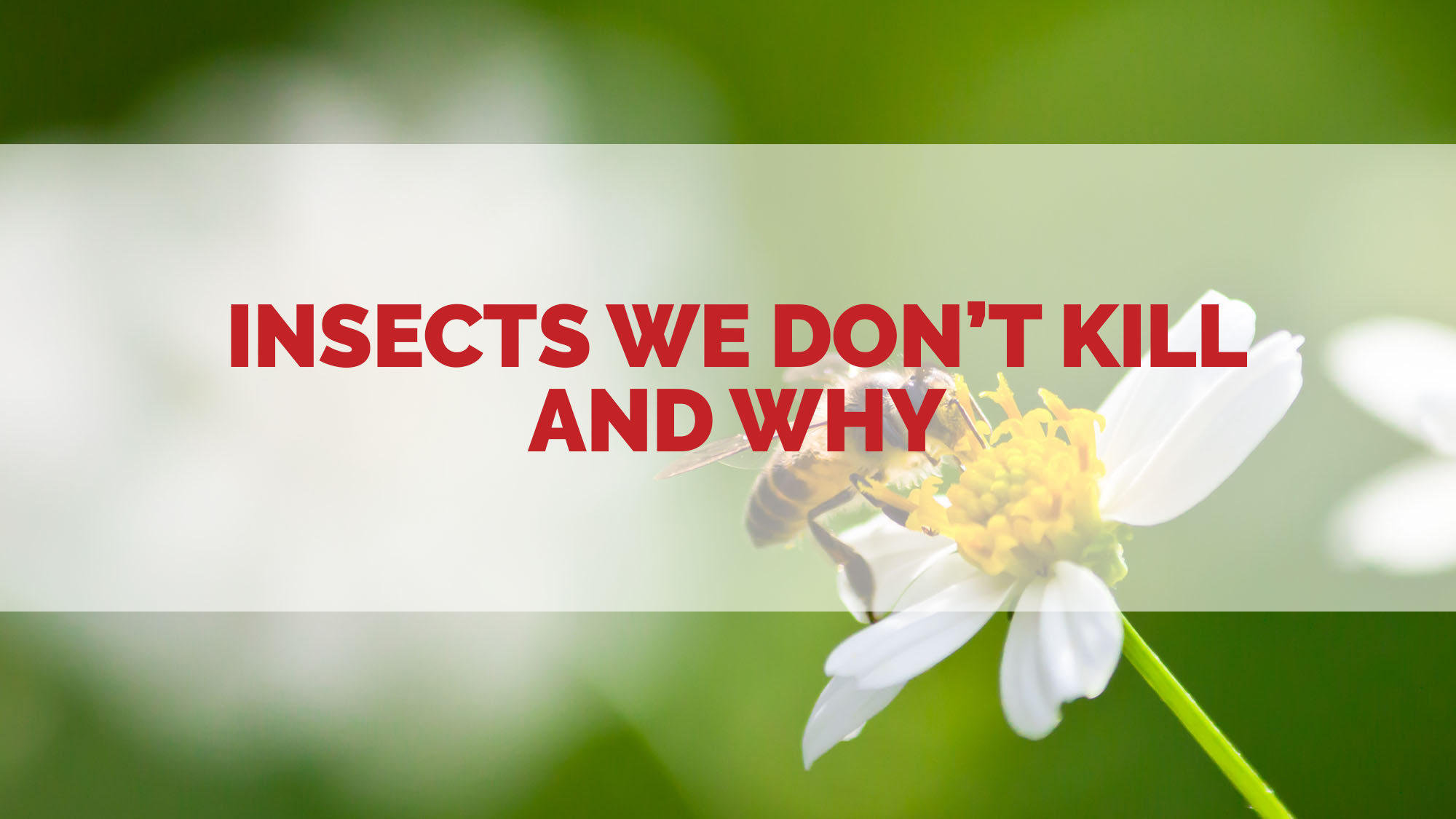 There’s nothing unusual about finding insects in your service yard or ants in your pantry, especially during this time of year. Although people’s fear of creepy crawling things may drive them to kill those seemingly terrifying creatures, you should always consider that doing such a thing would be both cruel and unnecessary every time you get a craving to reach for your nearest bug spray or rolled piece of newspaper. After all, there are other, more humane ways to resolve our issues with troublesome bugs. Now, we’re not trying to say that you should live with flies in your fruit bowl – what we’re actually trying to tell you is that you can never be completely bug-free.

There are many people out there who don’t know that their homes are packed with insects and their relatives (collectively called arthropods), most of which we pretty much never even see. The residents of many such homes have used a bug spray regularly to get rid of those creatures. But, none of those homes ever really got around to becoming completely bug-free. Far from it! The good news here is that most of the bugs that occupy such homes are benign, with some of them being even beneficial in some ways. That being said, whether we consider them useful or not, insects are a crucial part of the larger ecosystem and killing them would have a lot more consequences than some people could even imagine.

Although it’s true that insects can be quite annoying sometimes, killing every single bug you stumble upon is not going to do you any good. As long as they stay outside of your home, both you and the environment will benefit from their existence. And now, we’re going to talk about some of the insects that you should never kill!

What are the insect’s we shouldn’t kill?

According to National Geographic, ladybirds can consume more than 5,000 pests in their lifetime. There are dozens of similar creatures on our planet that actually do good things for us – for example, some of those creatures eat harmful insects and pollinate our crops. Such creatures don’t deserve to be killed. Instead, they should simply be caught and released outside.

As you may already know, stink bugs are not the most pleasant creatures that you could find in your backyard or at home, but they don’t intend on doing anything bad to you or your premises – what they’re actually doing is trying to find a warm place for themselves when it’s cold outside. Keep in mind that you should never spray or kill these bugs even if they release a funny smell that’s going to make you wish that you were miles away from them. The reason for this is that stink bugs prey on caterpillars, aphids, and plant-eating beetles.

There is nothing wrong with being afraid of spiders. They have way too many legs and they move quite fast as well. However, spiders are also an extremely important part of our ecosystem – spiders that we find in our cellars sometimes make webs to catch other spiders and pests, as well as disease-carrying insects like mosquitoes. And while it is true that some types of spiders – like brown recluses and black widows – can be dangerous for humans, most household spiders are actually harmless. Creepy appearance aside, some common spiders like wolf spiders are pretty much your best friends when it comes to pest control. They are known for being quite good at eliminating insects that you don’t want to find in your house – like beetles and ants – and they are also quite good at keeping insects under control at all times.

When it comes to eliminating pests that you can find in your garden, praying mantises are some of the best mercenaries that you could find these days. A single species is capable of consuming dozens of insects, effectively keeping your plants from getting damaged. Praying mantises are so useful that there are some people out there who would even be willing to buy a few of them just so that they could release them in their gardens to keep other insects from damaging their plants.

Honeybees are a crucial part of our ecosystem. They do a great job of collecting nectar and pollinating both crops and flowers. A single bee usually visits up to a hundred flowers in just one trip. It’s also a well-known fact that bees are awesome when it comes to creating delicious honey. Although bees are quite useful, it doesn’t necessarily mean that you should start inviting them over to your house.

Green Lacewings are tiny little creatures. However, they are also extremely useful. People sometimes refer to these insects as stink flies due to the foul smell that they release when touched. Due to their ability to consume up to 200 species a week, some people also like to call these insects aphid lions. Green Lacewings are known for eating whiteflies, spider mites, mealybugs, thrips, and leafhoppers. Some companies even offer their eggs for natural pest control.

Earwigs may look terrifying to some people due to their scary-looking pincers, but they could actually come in handy in certain situations. These insects are relatively harmless and so long as you don’t touch them, they most likely won’t use their pincers. They feed on both decomposing plant matter and dead insects.

Aphid midges are the tiniest flies that you are probably ever going to see in your life. They feed on approximately 60 different types of aphids and if you have a garden, you should consider getting some of these tiny little creatures to protect your plants. It should also be noted that these flies can exterminate aphids faster than any ladybug or lacewing ever could.

If you grow tomatoes in your garden, you should never kill any Braconid wasp that you come across. These wasps feed on dreaded tomato hornworms and they are also known for killing some other damaging pests as well. Essentially, Braconid wasps just might be the unsung heroes in many people’s tomato-saving stories.

There are many people out there who call daddy-long-legs spiders when in reality, that’s not what they actually are. Unlike spiders, these arachnids don’t contain any venom inside of their bodies. They feed on a wide variety of both pests and spiders. Which means that they can do some incredible things when it comes to protecting your garden, as well as your plants.

Insects are much smarter than some people give them credit for. And they might actually be able to feel pain after all. Ants know exactly what they need to do to find the fastest point from point A to point B. Even with their tiny little brains, insects are more than capable of feeling consciousness. One study has shown that some insects like ants contain the same chemical that allows humans to feel pain.

It is also important to note that toxic chemicals that people use to kill ants could also harm us. So, instead of killing insects, you should try hanging a cluster of cloves in a room or leaving an orange peel outside of your house. This should keep flies from entering your premises. If you squeeze a little bit of lemon juice alongside ants’ entry points, they won’t cross over them. Cockroaches can be a little bit more opportunistic than some other insects out there. So, be sure to seal your food in airtight containers and take their potential hiding places out of the house. Once you’ve done this, scatter some bay leaves or catnip around the house to keep them from coming back inside. You can use basil plants to keep mosquitoes at bay.

No matter how big or how small they are, all beings belong to a circle of life. So, let’s try and include them in our circle of compassion as well.

If you think there are some pests lurking around your property, contact Aardwolf Pestkare immediately.